A conversation with Annabelle Mauger and Julien Baron 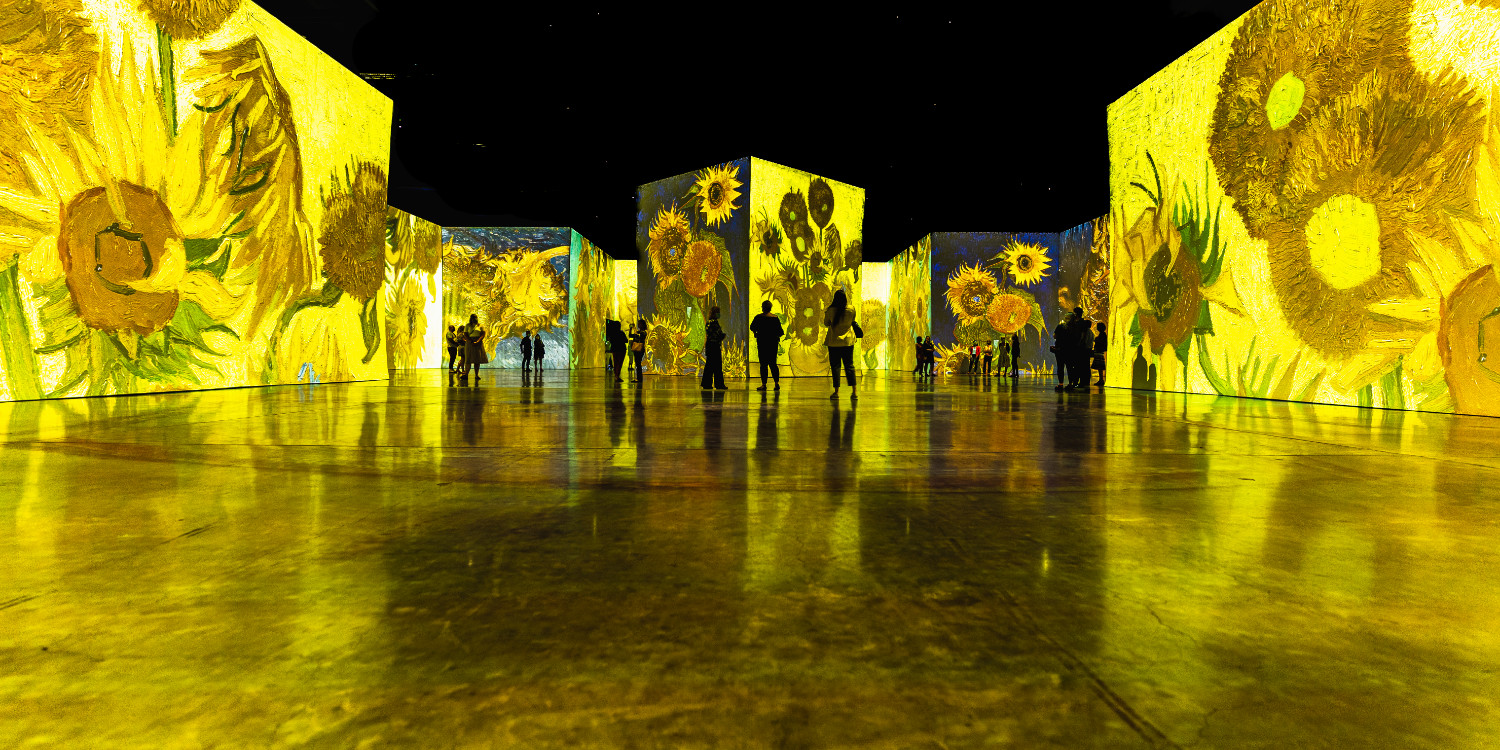 Annabelle Mauger and Julien Baron, from lililillilil, talk about the key ingredients that lie at the heart of immersive art experiences, sharing their experience of touring their immersive exhibitions dedicated to Van Gogh, Picasso and Monet.

Teo: Along with Julien Baron, co-founder of your production company lililillilil, you specialise in the production of immersive art experiences. Your exhibitions are designed to be presented in large venues around the globe, and are currently on show in Buenos Aires, Madrid, London, Quito. These productions propose a monographic discovery of international artists and their work. Could you tell us what your travelling exhibitions are about?

Annabelle Mauger and Julien Baron: The Imagine exhibitions present some of the most iconic paintings of artists such as Van Gogh, Picasso, Da Vinci and Monet in an original and digital way in a single space. These artists’ works are on display in prestigious museums and collections around the world. Our exhibitions are a unique way of making these paintings accessible to large international audiences, regardless of their culture, language, age, or where they live.

Each of our exhibitions is an invitation to discover the artistic realm of a famous painter. We are directors, not artists. What we want to do is show the works as they are, without altering their colours and the pictorial choice made by the artist, and to guide the visitor’s gaze towards every detail of the work. Our exhibitions are supported by many museums and foundations, including the Picasso Administration, which has placed particular trust in the scientific engagement offered in our educational spaces, which are designed in collaboration with art historians and specialists in engagement and outreach.

Each project is the result of a very personal reflection on the work. For Van Gogh, created in 2008 for Cathédrale d’Images, we were at the Beaux-de-Provence quarries in Provence, a region where the Dutch painter had lived a century earlier. We wanted to show local audiences how Van Gogh painted this area. With Picasso, we wanted to somehow ‘sculpt’ his painting. We worked with the architect Rudy Ricciotti to divert and alter the rules imposed by an immersive experience. Finally, for Imagine Monet, we wanted to address the work of the man nicknamed “the father of Impressionism”, and who was in a way a precursor to immersive exhibitions. Indeed, Monet painted canvases measuring up to 17 metres in length. It is now easy to see how the Orangerie might have been the first immersive museum in the world.

Your artistic process is founded upon the concept of Image Totale©. Could you tell us about this creative approach and its origins?

The concept of Image Totale© was conceived in 1975 by Albert Plécy, my grandfather by marriage. It was turned into a reality in 1977 with the creation of the immersive experience Cathédrale d’Images in the quarries of Baux-de-Provence, which aimed to show works of art out of their frames, to explain the meaning of them, and make the visitor gaze in wonder. The first exhibition in Image Totale© at the Cathédrale d’Images was Les très riches heures du Duc de Berry, a medieval illumination which had been totally inaccessible to the public at that time as it belonged to a private owner.

The name Cathédrale d’Images is not a coincidence. Long before museums existed, cathedrals were places for the dissemination of works of art. The Stations of the Cross, created by artists of the time, made it possible to explain the life of Jesus even to those who could not read. Our work is inspired by this approach. As Albert Plécy said: “We have taken centuries to build cathedrals of stone, our Cathedrals of Images will be built from second to second” using film and slides, then digitally since 2007/2008. This message remains our number one aim as Julien and I create exhibitions. It is for this reason that we wish to retain the original appearance of each work of art as a whole, with visual effects serving as a transition during immersion.

We created an exhibition where the image was cut out and sculpted on modules in the form of giant origami, which could be placed horizontally or vertically.

How does your team create narratives in these immersive art experiences?

Each Imagine exhibition is not a simple contemplation. It’s all about creating an experience based on the senses. There is sight, with a vision that invites us to rethink the notion of perspective and depth of field. And there is hearing, with a soundtrack designed specifically to accompany the narrative discourse and the interpretation of the work. For example, Monet’s works depicting his family and loved ones, such as Woman with a Parasol, correlate with an excerpt from Bizet’s opera The Pearl Fishers, whose melodious and strong voices help showcase the painted figures. This also makes it possible to draw a parallel between the long-ignored Monet and a composer like Bizet, whose genius went unnoticed at the time of this opera, which was produced before he created Carmen. And finally, more generally, the emotions felt by the visitor.

The exhibition is based on a scenario, produced with art historians and engagement specialists, which sets the pace of the projection and precisely defines the artistic angle. For example, for Imagine Van Gogh we only deal with the last two years of his life, namely his arrival in Provence and Auvers-sur-Oise. For Imagine Picasso, we wanted to run through all his paintings, to show the different techniques he used and created and how they evolved over time. We also wanted to make his work more accessible, and to humanise the artist.

At the start of each exhibition there is an educational space created by cultural engagement specialists. This introductory area aims to prepare the visitor for the immersive experience and the discovery of the work of the artist. For Imagine Picasso, for example, we chose to exhibit on a giant panel all the presented works as well as the different chapters of the exhibition. For Van Gogh, we endeavoured to describe the letters he sent to his brother Theo, because this correspondence allows us to create a direct relationship with the visitor, going from the ideas described to his brother, to the drawings on the letters, to the resulting paintings.

You mentioned how important it was for the Picasso project to break the rules of immersion. Could you tell us about how you designed this particular experience?

For Imagine Picasso, we made the decision, with the architect Rudy Ricciotti, to “break” the rules of “classic” immersion such as vanishing lines, perspective, open spaces, ceiling height and elevation. We created an exhibition where the image was cut out and sculpted on modules in the form of giant origami, which could be placed horizontally or vertically. The image could also be tilted, which helped maintain some form of height for some works in lower ceiling spaces. This approach enables us to highlight a detail, a particular angle, and to create new vanishing lines for each work. The Picasso Administration even allowed us to change the direction in which certain images are read with some canvases, by projecting works from top to bottom, or even horizontally.

This exhibition design reminds us that Pablo Picasso was a productive painter, but also a prolific sculptor. It also echoes Cubism, of which Pablo Picasso was one of the precursors. Designed as a journey that invites visitors to move around and engage individually with the space, it creates a playing field that is accessible to all audiences, even children. This simplified reading – free of academic frameworks – can make the work of Pablo Picasso more accessible. It is also a nod to the Spanish painter who cultivated his inner child throughout his life.

The scenario is as the heart of the experience, it gives meaning and rhythm to the content that is being projected.

There are a growing number of immersive art productions that are travelling around the globe, providing a variety of experiences. Are they all designed with the same technical resources? How does immersive art work?

There is a remarkable number of immersive exhibitions, with a range of subjects and approaches. Some of the key features that distinguish them are:

More and more museums are integrating immersive experiences into their exhibition design to attract new audiences or as a new engagement resource.

What kind of team and what kind of skills have to be brought together for the development, production and promotion of such an exhibition?

A number of skills are required to organise an immersive exhibition project.

What do you think could be new avenues that will be explored in the coming year for the development and production of immersive art exhibitions?

In my opinion, there are several avenues to explore regarding the future of immersive exhibitions. Firstly, the integration of immersive spaces in so-called classic exhibition design. More and more museums are integrating immersive experiences into their exhibition design to attract new audiences or as a new engagement resource. We can see this trend developing with, for example, the opening of venues such as the Immersive Grand Palais in Paris. Secondly, immersive processes are being incorporated in the performing arts, such as theatres and concerts, supporting an artistic process, an approach. And finally, the development of venues dedicated to immersive experiences all over the world. In recent years, several dedicated spaces have emerged, such as Artechouse, The Lume (USA) and TeamLab (Tokyo).

Annabelle Mauger, artistic director, and Julien Baron, design lead and technical producer, head up lililillilil, a company which designs and stages immersive exhibitions in Image Totale©. Their Imagine exhibitions, driven by artistic and technological creativity, are designed to tell stories by unleashing the emotion contained in the works of art, presented in their authentic form.