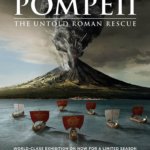 The untold roman rescue reveals how the Roman navy came to dominate the Mediterranean, and how this control created a boom in maritime trade not seen again for a thousand years.

The entire world knows the legend of Pompeii. In 79 AD Mount Vesuvius erupted, spewing huge waves of volcanic ash over the Bay of Naples.
One of Rome’s greatest writers and scientists, Pliny the Elder, was stationed across the water from Pompeii at Misenum. He ordered a fleet of warships to rescue as many people as possible from the doomed city. So began one of the first recorded rescues by sea of civilians by a military force.

Created in collaboration with Contemporanea Progetti. Treasures of the Natural World