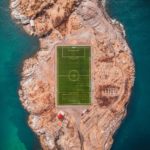 Rare insight into the world’s most popular sport
Message

Behind the scenes access to the people and processes that shape the world’s most popular sport, from the designers of the latest high-performance football boots to the biomedical engineers transforming the physical limits of the player’s body.

It is estimated that more than half the world population – some 3.5 billion people- watched part of the FIFA World Cup in 2018. Football is unquestionably the world’s most popular sport, with a dedicated fan base and truly international reach. It is also a significant industry, with European football alone being estimated to hold a value of £22 billion in 2016. How did football evolve to be such a significant part of our cultural landscape, and what role has design played in shaping the sport?

‘Football- Designing the World’s Game’ is a large-scale exhibition exploring the design story behind football, unpicking how design has been used to push the game to its technical and emotional limits. From the master-planning of the world’s most significant football stadiums to the innovative materials used in today’s boots, the graphic design of team badges and the grassroots initiatives pushing back against the sport’s commercialisation, the exhibition will provide a rare insight into the people and processes that have made football what it is today.

From Degas to Warhol, Masterpieces from Johannesburg Art Gallery