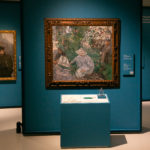 The exhibition includes sixty one works, which belong to different museums and private collections.

Édouard Manet, the main exponent of Impressionism, admired Goya and used Spanish motifs in some of his most significant works. However, Spanish painters of the second half of the 19th century did not immediately embrace this new artistic technique and curators were not very eager to exhibit new French Impressionist works in Spain.

At the same time, some Spanish artists were friends with Impressionists. Pere Vidal de Solares, a Catalan painter of Cuban origin, was painted by Renoir in Bal du Moulin de la Galette (1876). Puerto Rican painter Francisco Oller painted in the style of Cézanne and Pissarro, whom he got to know in Paris at the Café Guerbois, the studio of Charles Gleyre, and the Académie Suisse. Adolfo Guiard, according to Juan de la Encina, met Degas in Paris in 1878. Girona sculptor Ricard Guinó succeeded in proving in court that he was co-author of the works he had created under Renoir’s instructions.

Marià Fortuny, who died in 1874, the same year when the Impressionists showed their first exhibition at Nadar’s studio in Paris, had painted in an easy and free style, almost alike to the nascent style of Impressionism.

Darío the Regoyos was the Spanish painter who best knew the innovative European groups and was a regular at the avant-garde circles in Brussels, where he met Meunier, Van Rysselberghe, Verhaeren, Ensor, and Rops. Pisarro, Rodin and many important Neo-Impressionists, such as Seurat, Signac, and Luce, were amongst his friends.

Ramon Casas, who arrived in Paris in 1881, was close to Impressionism. His work Bullring (1884, Museu de Montserrat) shows an early influence of the most colouristic Impressionism. Afterwards, Casas’s most distinctive style, that of Plein air (1890, Museu Nacional d’Art de Catalunya), was quite more similar to Whistler and Degas. Casas’s friend Santiago Rusiñol, who painted in a style similar to that of Degas, participated in the Septième Exposition des Peintres Impressionnistes et Symbolistes (1894). In 1894 Rusiñol and Ignacio Zuloaga shared an atelier in Paris.

The influence of Impressionism did not really succeed in Spain at the time, except for the northern regions of Catalonia and the Basque Country, but some painters, such as cosmopolitan Aureliano de Beruete or Joaquín Sorolla —disciple of the former—, assimilated some traces of this new school later on.

In December 1897, Catalan painters Isidre Nonell and Ricard Canals took part in the Salon des Impressionnistes et Symbolistes. Nonell, who was the standard-bearer for the most innovative Catalan painting, was more inclined towards Expressionism than Impressionism, but Canals did connect with the Impressionist scene, taking into account that Durand-Ruel, the first art merchant of Impressionism, traded his works.

Even so, orthodox Impressionism did not fully flourish in Spanish painting until Marian Pidelaserra and Pere Ysern underwent an astonishing conversion to Impressionism in Paris (1899–1901). The gallery Sala Parés, in Barcelona, showed the works they had painted in Paris. Ysern showed his work in July 1901 and Pidelaserra in February 1902. For the first time, Impressionist landscapes, primarily urban, close to Monet, Sisley, and Pissarro, were shown to the South of the Pyrenees.