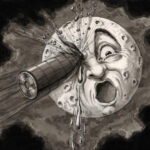 Georges Méliès, painter, illustrator, caricaturist, magician, phantasmagorist, director of the Robert-Houdin theatre, decorator, theatre artist, writer, actor, technician, and visionary director of over 500 films between 1896 and 1912. Creator of the first glass-enclosed cinema studio, Méliès is at ease with all steps in the cinema production chain, from film design to the selling of copies: he drew the plans for the scenery, financed, produced and acted in his own films along with other actors, whom he directed. And it was Méliès who drew the plans for his unique studio, positioned the camera, and wrote his scenarios. For almost 20 years, he was considered absolute master of the world of magic and cinema special effects. All Méliès’ work positively shines with a living fantasy, an irrepressible imagination, an irresistible jubilation. His cosmogony is an explosive and highly original mixture of phantasmagoria, playful mischief, illusion, flames and smoke, carefully coloured by master brushstrokes.

An excellent actor and remarkable mime of extraordinary agility, Méliès acted in almost all his films. Sometimes, there are several Méliès’ at the same time, such as One Man Band (1900) with no less than 7 Méliès’ on the same image. Another striking Méliès appearance is in The Man With The Rubber Head, (1902) where he increased the size of his head until it exploded. A special effects genius, Méliès prefigured George Lucas and Steven Spielberg. Theatre machinery, pyrotechnics, optical effects, horizontal and vertical rolling titles, stop motion photography, dissolves, multiple exposures, editing effects, and colorized film stock. Sometimes, it seems that this wizard of techniques invented and used everything trick in the book. Thanks to his precocious awareness of the magical power of the animated image, and his keen sense of the direction, Méliès turned the emerging 7th art upside down and inside out. No surprise therefore that he still exerts such fascination.

Synopsis of the exhibition

Henri Langlois, founder of the Cinémathèque française and a Méliès admirer, was one of the first to bring together Georges Méliès collectibles such at drawings and objects. Shortly before Méliès’ death, in 1938, Henri Langlois managed to save some of his films. In 2004, Madeleine Malthête-Méliès, Georges Méliès’ granddaughter, sold his entire collection to the French Cinema Board (CNC), who purchased it on behalf of the State of France and the French Ministry for Culture. Together, the CNC and La Cinémathèque française account for an unparalleled collection of archives and object that can be used to retrace and understand the work of Georges Méliès: 175 costumes, a dozen

documents, and other miscellaneous items (including sculptures).

Original items are now presented in the Méliès Museum, permanent exhibition of La Cinémathèque française: but the touring exhibition made of reproductions and facsimile specialy made for the tour, give access to these treasures beyond Paris.