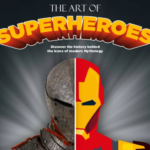 The Art of Superheroes; the Myths, the Heroes, the Artists Claimed

The Art of Superheroes; the Myths, the Heroes, the Artists

The Art of Superheroes – the Myths, the Heroes, the Artists (working title) invites you to explore this incredibly imaginative world, where men and women are able to fly, read minds, control time and magnetic fields, climb walls and manipulate magic. Everything is possible and the only limitation is the unbridled imagination of the artists – writers and designers – who in some eighty years of history have created an artform. What began as entertainment meant for the youngest, has gradually turned into an unique form of art and expression that has transcended the boundaries of the print media to arrive on television and in cinemas around the world.

From the Amazons to Wonder Woman, from Frankenstein to the Hulk, from Robin Hood to the Green Arrow, legends change their appearance, but remain faithful to their original mission to guide new generations towards a better, brighter future, where action and battle are the flip side of a coin that calls for morality and responsibility.

In this highly innovative exhibition which combines traditional display with cutting-edge technology, the characters of DC Comics and Marvel Comics, the two publishing houses that invented the genre, are explored and analyzed in 360-degrees, illustrating the multiple facets of the craft with surprising historical and cultural contents. In a journey through time, The Art of Superheroes – the Myth, the Heroes, the Artists reconstructs the evolution of the characters in relation to the real world, from their inception and original powers to the emergence of the action figures and trophies that have made their stories neo-mythology. Around the world, many countries have made their contribution to the Superheroes, offering different and contrasting visions, adding pieces to a now planetary mosaic and evidence of a common response without borders.

The exhibition is available in 2 versions:
– the original version, with original archeological artefacts
– the immersive experience version, with life-size reconstructions , interactive technology, video-projections