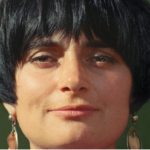 The photographer, filmmaker and artist, Agnès Varda, spent 70 years creating a personal work which was fundamentally rooted in its time. She was a trailblazer of the New Wave movement and one of the rare women of her generation to have had a successful career as a filmmaker.

Her filmography boasts over forty short and feature-length films between fiction and documentary, including her greatest hits, Cléo from 5 to 7 (Cléo de 5 à 7) (1962), Le Bonheur (which won the Louis Delluc Prize in 1965), Vagabond (Sans toit ni loi) (which won a Golden Lion at the Venice Film Festival in 1985) and The Gleaners and I (Les Glaneurs et la glaneuse) (2000).

Her early interest in painting and literature, along with her experience in theatre, strongly shaped her conception of the seventh art. A globetrotter and artist of conviction, Varda also paid close attention to the world and social upheavals. The themes of feminism, ecology and marginality transect her work, making it very relevant to the modern day.

I EAT, THEREFORE I AM