What virtual reality can bring to travelling exhibitions 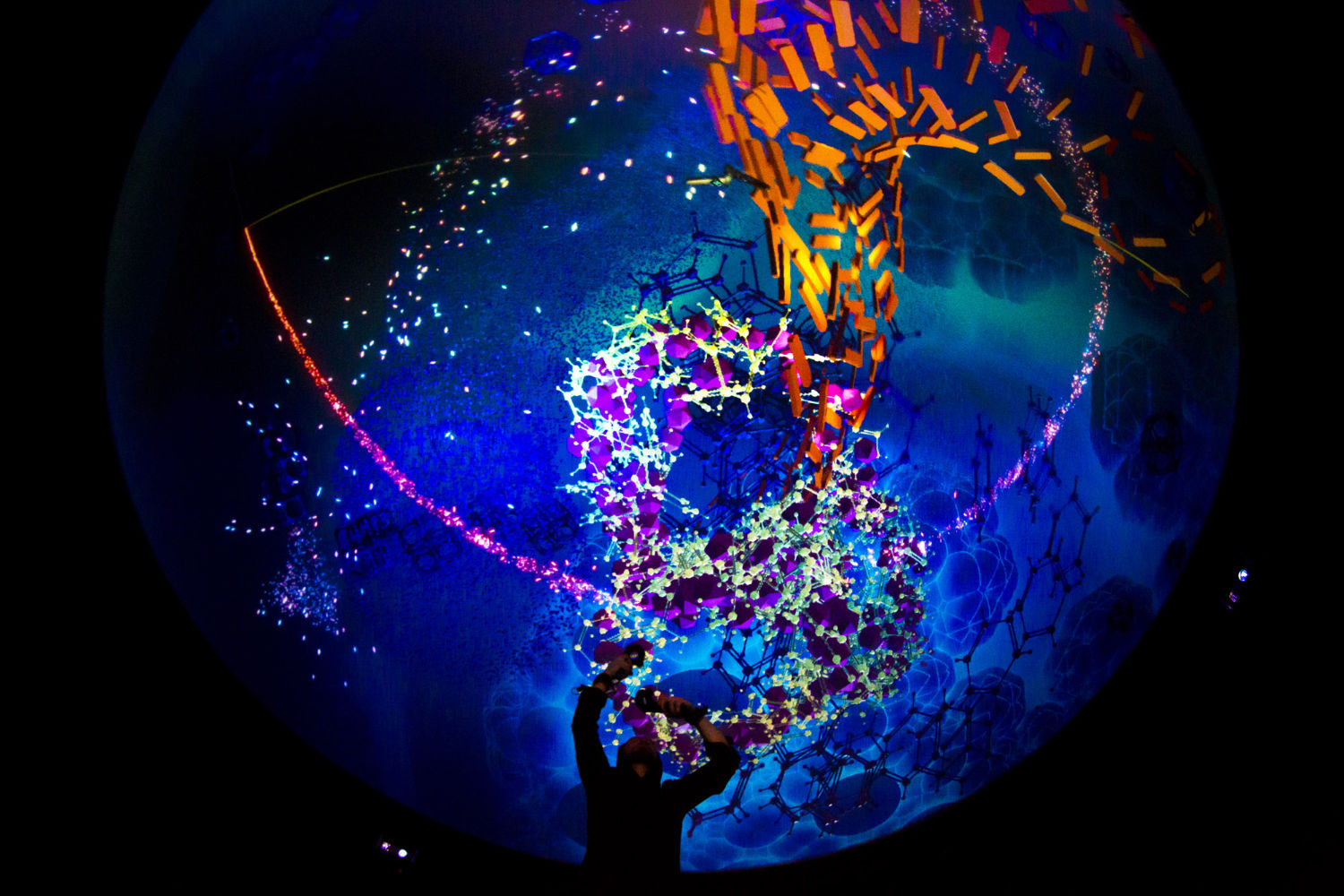 Virtual Reality (VR) is a powerful tool for creating experiences and telling stories. Many museums and cultural institutions that produce travelling exhibitions have already been considering how to take advantage of its potential. The Covid crisis brings a new set of issues to consider around using virtual reality, both for and against.

The technology is new enough that the rules and best practices for how to tell stories in VR are being discovered and improved upon every day. Curators, exhibit designers and educators can collaborate with VR producers to shape the future of how they communicate information in this medium.

The simplest way to define Virtual Reality is this: “Virtual Reality” (VR) creates a digital environment that replaces the user’s real-world environment.1 VR empowers people to become time and space travellers, to feel physically immersed in realities they could never otherwise experience. This visceral sensation of believing that you’re somewhere else is called ‘presence‘. It opens up new possibilities for storytelling, deeper ways of understanding ideas and experiences.

This feeling of presence, of being completely immersed in the virtual environment, is affected by three things: how well-crafted the story is, which headset or viewing device the experience was designed for, and which type of VR production method was used.

In this article I will describe examples of different ways to tell stories in VR, how VR can be used in travelling exhibitions, and best practices for presenting VR. In a separate technical report, I will also define different production methods and viewing devices, and provide recommendations for producing VR experiences.

Museums are one of the best environments to introduce people to VR documentary, narrative, and game experiences, because visitors feel that museums are trustworthy and safe spaces.

You cannot really know what it is like until you’ve tried it yourself, but imagine…

You can put on a virtual reality head set and while you may actually be sitting on a couch in your living room, you feel like you are standing in the Sistine Chapel in Rome, gazing at the exquisite paintings by Michelangelo on the walls and ceiling surrounding you. You can move to any point on the floor, walls or ceiling of this magnificent and enormous space, and see tiny details of individual brush strokes and even cracked plaster on the walls – all without the crowds who would normally be competing with you for the best views. Produced by Epic, IL DIVINO: Michelanelo’s Sistine Chapel in VR is an absolutely jaw-dropping experience, accompanied by an hour of informative audio commentary.

You open another VR application and find yourself in the Carnegie Museum of Natural History in Pittsburgh, PA, at the entrance to We Are Nature, an exhibition that closed back in September 2018. You quickly get a dollhouse view of the exhibition galleries and then zoom in to move around each exhibit in 360º, accompanied by audio, video, text and interactive options. You are looking at the evidence of climate change and how scientists are calling this a new geologic age, the Anthropocene. Full disclosure, my firm MediaCombo, co-produced this experience with GuidiGO.

Other types of virtual reality experiences can also be incorporated into an exhibition. For example, the Tate Modern presented Modigliani VR: The Ochre Atelier, in 2017 during their retrospective of the painter’s work. Visitors entered a small gallery, put on VR headsets and were transported out of the museum and 100 years back in time, into the artist’s studio in Paris in 1920. You really feel that you are there, in his frugal space, with candles and sunlight filtered through dirty windows illuminating his last paintings, seeing and feeling how he lived and painted in the last months of his life.

VR can also be ideal for providing experiences that are not readily available because they are too dangerous and require professional levels of expertise. Science North’s travelling exhibition Beyond Human Limits, for example, includes a VR experience where visitors can feel what it would be like to race down a backcountry slope in a showdown of snowboarder vs skier, twisting, sliding, and gliding down the hill from the perspective of your chosen athlete.

VR is also a powerful tool for bringing people to places that may not actually exist! Samskara, produced by Fulldome.pro, has been called a “beautiful, energy provoking art exhibit”. 360º dome projections and its Microdose VR experience immerse visitors in a virtual field trip to an alternate reality.

Right now, most people who have experience with VR know it through playing games at home, or at VR arcades popping up in shopping malls and store fronts.

Museums are one of the best environments to introduce people to VR documentary, narrative, and game experiences, because visitors feel that museums are trustworthy and safe spaces. Thus they are more likely to take a chance on trying something new.

Creating a 3D virtual version of a travelling exhibition can be of great interest for curators, scientists, exhibition designers, educators, funders.

How VR can be used to enhance travelling exhibitions

Travelling exhibition designers can use these diverse approaches to bring visitors much closer to the stories and objects in museum collections:

The value of a 3D virtual version of a travelling exhibition

Travelling exhibitions are quite costly to produce and usually take years to develop. Creating a 3D virtual version of a travelling exhibition can be of great interest and notably increase the value of the work of the curators, scientists, exhibition designers, educators, funders and everyone who was involved in development because:

VR augments traditional approaches to exhibition design and can provide fresh insights and new perspectives on the subject and story of an exhibition.

Best practices for presenting VR experiences in a travelling exhibition

Most people have not had a VR experience and are not familiar with what to expect in a headset so it is necessary for museums and cultural organisations to establish a procedure to onboard and offboard visitors.

A full report exploring VR for travelling exhibitions is available for readers. It includes a Guide to Storytelling in VR to learn more about how to tell stories in virtual reality, and a technical report providing a description of design paradigms, production methods and virtual reality headsets.

The report can be downloaded here.

VR is an entirely new way to deeply engage visitors in exhibition content. It augments traditional approaches to exhibition design and can provide fresh insights and new perspectives on the subject and story of an exhibition. As people become more familiar with using VR in a variety of contexts, they will be eager to know how exhibitions are enhanced by that sense of “presence” VR provides. Furthermore, since the arrival of Covid-19 there is great uncertainty around how and when crowds will be gathering again in public spaces such as museums. Virtual reality exhibitions, or versions of an exhibition, or signature VR components of an exhibition will certainly be important possibilities to explore as ways to enhance travelling experiences in a Covid-conscious environment.

Read more about how to tell stories in virtual reality with a guide to storytelling in VR and a technical report.

1 Definition from the Consumer Technology Association’s AR/VR Working Group, 2018. They have also provided these definitions of related immersive experiences: “Immersive Experience” is a deeply-engaging, multisensory, digital experience, which can be delivered using VR, AR, 360° video, MR and/or other technologies “Augmented Reality” (AR) overlays digitally-created content into the user’s real-world environment. “Mixed Reality” (MR) is an experience that seamlessly blends the user’s real-world environment and digitally-created content, where both environments can coexist and interact with each other. “360° Video” or “360 Video” allows the user to look in every direction around him/her.

We Are Nature, by the Carnegie Museum of Natural History in Pittsburgh

Beyond Human Limits, by Science North

Robin White Owen is President of MediaCombo, where she leads the creation of custom digital applications for internationally known clients in cultural, government and private sectors. She has spent her career at the intersection of art, technology and education and is passionate about leveraging new technologies like virtual and augmented reality to enable museums and historic sites like the Morgan Library & Museum in New York, the Carnegie Museum of Natural History in Pittsburgh, PA, and the Pollock-Krasner House & Study Center in East Hampton, NY to take advantage of these storytelling mediums to reach new audiences. Ms. Owen is a frequent panelist at museum conferences speaking about how to use AR & VR successfully.

How to develop and evaluate an exhibition that promotes intercultural understanding