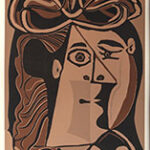 A GRAPHIC JOURNEY: PRINTS BY PABLO PICASSO – The Timothy Collins Collection – The Timothy Collins Collection presents an important and insightful gathering of etchings, lithographs and linocuts by one of the great masters of the 20th Century. This exhibition provides a unique window into a significant era in art history, and takes a serious and scholarly look at Picasso’s development and creative process, often not as accessible in his paintings.

The exhibition richly illustrates the three major phases of Picasso’s printmaking career, as well as all his major artistic themes. One of Picasso’s strengths was his ability to tackle every major topic of humanity including love, death, war, power and envy. The “bull”, for example, is one of Picasso’s favored and most powerful images in his work – at times symbolizing the people of Spain, the brutality of war, or most commonly perhaps, male virility, especially his own. Picasso is omnipresent in his works, sometimes as a bull, sometimes as a man and at times, several characters simultaneously. This is perfectly represented in Quatre Femmes Nues et Tête Sculpture, 1934 (#7), where, he does not directly portrays himself as a character, but rather as a sculpture, that gazes ominously upon the women that he has conquered.

Picasso was a major innovator in the medium of printmaking. He made prints throughout his career — his first in 1899, when he was still a teenager; his last in 1972, when he was 90. Experimenting all the while, he produced some 2,400 prints in total, in a wide variety of techniques, most notably etching, lithograph and linocut. Over the decades he worked with numerous print ateliers, including Arnera, Mourlot, Crommelynck, Frelaut, Lacouriere, Desjobert, and Fort.

A special feature of the Collins Collection is the number of proofs. These proofs illustrate the unique working relationship Picasso maintained with his printers and their ateliers and allows for the examination of the working process behind it. Their craftsmanship made Picasso’s extensive and revolutionary experimentation with the media possible. In the six examples of Tete de Femme au Chapeau, (above) from the exhibition, we can see preliminary proofs in the various colors along with the final full color print.

Another highlight of the exhibition is a cancelled original copper printing plate from 1948, Femme au Chignon, along with a print pulled from the plate.