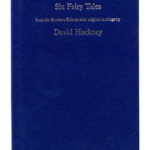 
This hiring fee is set for the following exhibition format:
See all available package options
In 1970 David Hockney and Petersburg Press released Six Fairy Tales, a compilation of 39 etchings and the texts of Jacob and Wilhelm Grimm’s fairy tales, including: The Little Sea Hare, Fundevogel, Rapunzel, The Boy Who Left Home to Learn Fear, Old Rinkrank, Rumpelstilzchen. In this exhibition of 39 etchings illustrating the 6 fairy tales from the Brothers Grimm, Hockney has given each fairy tale his own interpretation. Rather than illustrating the stories literally, he has chosen vivid images to encapsulate a mood or detail. Some of the tales are familiar, like Rapunzel and Rumpelstilzchen; others, such as Old Rinkrank, Fundevogel and The Little Sea Hare are little known. The tales are drawn from centuries of folklore. As Hockney points out: “The stories weren’t written by the Brothers Grimm…they came across this woman called Catherina Dorothea Viehmann, who told 20 stories to them in this simple language, and they were so moved by them that they wrote them down word for word as she spoke.” His contemporary and often humorous approach to the tales is reflected in the quirky nature of the images. Of Rapunzel he says “…the stories really are quite mad, when you think of it, and quite strange. In modern times, it’s like the story of a couple moving into a house, and in the next door’s garden they see this lettuce growing: and the wife develops this craving for the lettuce that she just must have and climbs over to pinch it, and the old woman who lives in the house next door says well, you can have the lettuce if you give me your child, and they agree to it. And if you put it into terms like this and imagine them in their semi-detached house agreeing to it all, it seems incredible.” The 39 etchings were drawn directly onto copper plates by Hockney between May and November 1969. It was a decade in which etching featured strongly for Hockney. As well as Grimms’ Fairy Tales, he made two other important series: A Rake’s Progress (1961-3) and Illustrations for Thirteen Poems for CP Cavafy (1966). David Hockney had always loved Grimm’s Fairy Tales and had read all 220 of them. He also admired earlier illustrations to them by Arthur Rackham and Edmund Dulac. In 1969 he decided to make his own images. He especially enjoyed the elements of magic in the tales, and his images focus on his imaginative response to the descriptions in the text rather than attempting to concentrate on the most important events in the narrative. They are therefore more than simply illustrations: they stand on their own as images, independent of the stories. The exhibition will be available beginning in the Fall of 2010. Please contact LTE for more details. All images c. David Hockney ________________________________________ Exhibition Info Contents: 40 framed works, 4 books of Grimms
Past and Future Venues
2010 November 11, 2010 - January 9, 2011 Crystal Bridges Museum of American Art, Bentonville, AR 2011 June 3 - August 28 reserved Sonoma Valley Museum of Art, Sonoma CA 2012 January 12 - March 25 Louisiana Art and Science Museum Baton Rouge, LA May 1 - August 18 reserved Sept 15 - November 15 reserved Maryhill Museum of Art, Goldendale, WA 2014 November 7 - January 16, 2015 Lake Charles Historic City Hall Arts and Culture Center
Highlights
Curatorial excellence
Art
Decorative arts
Design
Fine art
Literature & Manuscripts
Modern art
Go back to Exhibition Listings