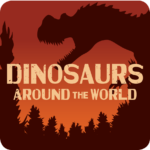 Dinosaurs Around the World Claimed

Dinosaurs Around the World

This hiring fee is set for the following exhibition format:
See all available package options
Core Experience
Panels and graphics
Reproductions
Exhibition Partners
DR. GREGORY M. ERICKSON, a world-renowned paleontologist, is the Senior Scientific Advisor for DINOSAURS AROUND THE WORLD. Dr. Erickson is working with Imagine Exhibitions as an advisor, writer, and editor of all paleontology copy for DINOSAURS AROUND THE WORLD. One of only 150 full-time professional dinosaur paleontologists in the world, Dr. Erickson received his doctorate from the University of California, Berkeley and conducted post-doctoral research at Stanford University and Brown University before joining the faculty at Florida State University in Tallahassee. Dr. Erickson’s research focuses primarily on dinosaur growth, life history, physiology, behavior, and feeding biomechanics. He is curator of the University’s zoological museum, and holds research appointments with the American Museum of Natural History in New York, The Field Museum in Chicago, and University of Alaska’s Museum of the North in Fairbanks.
Dr. Erickson has published over 100 scientific papers, many appearing in top journals such as Nature, Science and Proceedings of the National Academy of Sciences. He has also participated in over fifty expeditions, including trips to the Gobi Desert of Mongolia, Romania, and the Alaskan Arctic.
Imagine Exhibitions Inc.
Rainer Christian Kurzeder
Southern Hook Photography

DINOSAURS AROUND THE WORLD represents the next generation of traveling dinosaur exhibitions. In this dinosaur adventure, guests travel the globe to discover the huge assortment of dinosaurs living on each of the seven continents during the Age of Reptiles. Accented by a multi-layered narrative,DINOSAURS AROUND THE WORLD brings the Age of Reptiles to life like never before in an experience that thrills and educates visitors. Dinosaurs were the dominant terrestrial animals throughout the Mesozoic Era (also known as the Age of Reptiles). During their remarkable 172-million-year reign, they adapted into a variety of forms from long-necked herbivores as large as whales, to the tall and mighty T. rex! Continental drift, and the land bridges that would appear and disappear over time due to sea level fluctuations and volcanic activity, allowed dinosaurs to disperse to all corners of the globe, leaving each of the Earth’s seven continents with its own unique assortment of these giant reptiles.