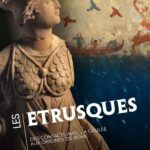 Among the great civilizations that populated the coasts of the Mediterranean and the territories of today’s Europe, the Etruscan population is undoubtedly one of the most fascinating, but still one of the least known to the general public.

This unique and in-depth exhibition brings to light the history of this mysterious and refined civilization in its evolution, from the 9th century BCE, up to the dominion of the Roman Empire in the 1st century BCE, particularly focusing on the relationship between the Etruscans and the populations of Southern Gaul.

Divided into 5 thematic sections, the exhibition unveils several and emblematic aspects of the extraordinary Etruscan civilization starting from its origins and its historical-geographical contextualization. An exceptional selection of original artefacts, leads the visitors on a journey through the Etruscan society, revealing its social, political, and urban structure, together with the divine dimension deeply sought by the Etruscans through divinatory arts, votive offerings, and funerary rituals. The exhibition ends up highlighting the strict ties between the Etruscan and the Roman culture, dealing with the great cultural, political, and religious heritage that the Etruscans left to the Roman Empire.

On show a selection of unique +100 original artifacts, drawing from some of the most important archaeological excavations in the territory of ancient Etruria, including artworks from the two most significant Etruscan museums of Tuscany, and from the coasts of ancient southern Gaul. This great selection of original objects is accompanied by graphic panels, educational material for adults and children, but also videos and video projections, technological and interactive devices, suggestive environments, immersive rooms and other innovative multimedia devices.

Julius Caesar – Triumph and Death of a Roman Conqueror

Travel Photographer of the Year