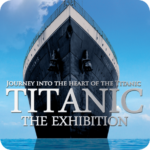 
This hiring fee is set for the following exhibition format:
See all available package options
Core Experience
Panels and graphics
Original collection
Titanic The Exhibition is an interactive exhibition sponsored by National Geographic, showcasing over 300 artifacts from Titanic and her sister ships and from famous films to tell the chronological, dramatic tale of the design, creation, launch, maiden voyage and tragedy of the largest and most luxurious ship in the world at the time. The artifacts are set inside beautiful fully immersive recreations of the ships interior and tell the latest details of her sinking and discovery. The artifacts are a combination of those that survived the sinking of the Titanic, her sister ships as well as items from the James Cameron blockbuster film Titanic. Titanic The Exhibition is an interactive experience, where visitors receive a boarding pass corresponding with a passenger on the ship. This allows the visitors to relate to the individual story of their passenger as they explore the first, second and third class galleries and the artifacts from each. They will hear the music of the era as they examine exact recreations of the ship’s interiors, stroll the promenade deck, and marvel at the famous Grand Staircase, the social gathering place of the ship. The stories of love and loss culminate in the final galleries showcasing personal effects and the individual anecdotes surrounding a tribute wall where each passenger’s fate is revealed. The Discovery Gallery, dedicated to the discovery and research of Titanic’s wreck site, features a raised glass floor; giving an impression of walking along the bottom of the ocean. Broken china and artifacts in the sand below allow visitors to experience what discovery teams saw during dives to Titanic’s wreck site. A striking and informative film, narrated by James Cameron, provides an in-depth look at the most recent forensic research related to the collision, breakup, and sinking of the Titanic. Also featured in the Discovery Gallery, National Geographic’s Emory Kristof’s award winning underwater photography of the Titanic lines the walls in a stunning display of the ship’s current state on the sea floor.
Photographs
Sculptures
Decorative objects
Technical Requirements
High ceiling height
Languages
English
Past and Future Venues
Selected past venues:

Jurassic Oceans: Monsters of the Deep