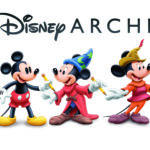 For more than 50 years, the Walt Disney Archives has carefully safeguarded the most treasured items from The Walt Disney Company’s history, including original scripts, movie props and costumes, Walt Disney’s correspondence and script notes, theme park artifacts, merchandise, millions of archival photographs, and many of Walt’s personal effects. Founded by Disney Legend Dave Smith in 1970, the Walt Disney Archives is a vital resource for every part of Disney, as well as an important research center for Disney scholars, researchers, and writers. The Archives also shares its countless pieces with Disney fans everywhere through its exhibitions and close association with D23: The Official Disney Fan Club.

All That Glitters: The Crown Jewels of the Walt Disney Archives