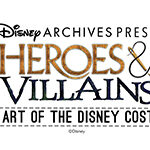 Heroes & Villains: The Art of the Disney Costume Claimed

Across nearly every medium Disney has touched, since the earliest days of animation, through innovations in live-action filmmaking, pioneering efforts in television, location-based entertainment and retail, and even gaming—one creative aspect of Disney has been seldom-recognized, but ever-present: that of costume design.

This exhibition explores nearly six decades of films produced by The Walt Disney Studios, Walt Disney Television, and Disney Theatrical Group, in an effort share with guests the level of craftsmanship and artistry required to produce every costume presented across stage and screen. Incorporating 79 costumes from 32 films, and representing 24 different designers worn by 71 different actors, Heroes & Villains: The Art of the Disney Costume exhibition will prove to be truly unique and magical experience for guests of all ages.