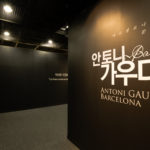 This hiring fee is set for the following exhibition format:
Content only

The present exhibition shows different building projects undertaken by Gaudí that shed light on some aspects of his work and its historical and cultural context. At first glance, one is amazed by the originality of his forms, ornamentation and chromaticism, the richness of his symbols and the inspiration he takes from nature. Looking further, one finds other underlying aspects that reveal Gaudí’s mastery and the rationality of the constructional system behind the forms. His unique talent is also apparent in the innovation of his constructional solutions, the result of lifelong meticulous study and work.

About 700,000 people have visited the exhibition around the world: