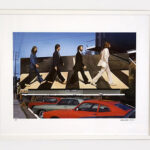 Rock’n’roll Billboards of the Sunset Strip

With the release of his critically acclaimed book, Rock “n” Roll Billboards of the Sunset Strip, Angel City Press, (Fall 2012), Robert Landau and Photographic Traveling Exhibitions have organized a touring exhibition featuring photographs from the book. The exhibition has been presented at Schumacher Gallery. Capiltal University Columbus, OH, The Skirball Cultural Center, Los Angeles, CA and the Arlington Museum of Art, Arlington, TX. Landau’s Billboard photographs were also on display at the Grammy Museum in Los Angeles in the exhibition “Trouble in Paradise” part of the Getty’s “Pacific Standard Time” initiative.

The exhibition brings to life this unique period in the history of rock and roll and the fabled Sunset Strip, whose nightclubs served as the birthplace to some of the best musicians of that era. Photos trace the early beginnings of the billboard phenomenon starting with the Doors breakthrough promotion for their first album in 1967, right up unto the advent of MTV in 80’s which signaled the demise of the era.

For a brief period of about 15 years, from the late 60’s through the 70’s and into the early 1980’s, classic rock and roll billboards dominated the Sunset Strip in Los Angeles. These one of a kind, hand painted megaliths loomed over L.A.’s most legendary boulevard for a month or two at a time before being dismantled, white washed and given a new incarnation in paint. Photographer Robert Landau, still in his teens, was there to document these ephemeral pop art masterpieces.

The exhibition is available in a variety of sizes and formats, framed or larger mounted prints and large banners to fit many different size exhibition spaces. Text panels are provided.

Robert Landau is also available to present a 30 minute slide lecture on the subject.

Photographs
Available Package Options
Turnkey
Collection and interpretation
More Details About Technical Requirements
The exhibition is available in a variety of sizes and formats, framed or larger mounted prints and large banners to fit many different size exhibition spaces. Text panels are provided.

Our Time on Earth