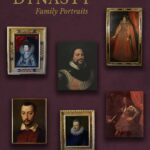 The city of Florence was born on the banks of the Arno river in central Italy in ancient times, but it would be the wealth and command of the Medici dynasty that ‘ruled’ the city for more than three centuries that empowered the city to

Their enormous wealth was consolidated in the Medici banks of the 1400s. Their quintessential patronage of the arts in the Renaissance is legendary. In the 1500s, their ‘de facto’ political influence was transformed into lasting hereditary political power. The Medici legacy was embodied in the family’s many sons, daughters and descendants – Grand Dukes, Queens of France, Popes and Cardinals – all

and always great patrons of the arts.

Organized by Contemporanea Progetti, this exhibition of ca. 40 original Medici

portraits from a venerable, Florentine museum, unfolds on parallel paths, enhanced by graphic and multimedia elements. On one track, it traces

the vicissitudes of this illustrious dynasty – stories of war, love, betrayal and family secrets. On another it investigates and exemplifies the history, purpose and nuances inherent to the genre of portrait painting.

The Expressionism in Switzerland