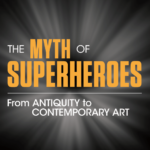 The Myth of Superheroes. From Antiquity to Contemporary Art Claimed

The Myth of Superheroes. From Antiquity to Contemporary Art


This hiring fee is set for the following exhibition format:
See all available package options
Core Experience
Immersive digital experience
Panels and graphics
Original collection
Exhibition Partners
Fabrizio Modina - Curator
The Myth of Superheroes. From Antiquity to Contemporary Art is the first international travelling exhibition that aims at making visible the common thread linking the past, the present (and the future) of the myths. It highlights the strict relation between ancient and modern mythology and presents a selection of all the forms of art involved in this mutual process. The different topics of the exhibition are developed through an exceptional selection of original objects: as the exhibition unfolds, archaeological artefacts dialogue with comics, drawings, animations, ancient dolls, and modern action figures, in a highly innovative exhibition pathway for adults and children. The exhibition invites you to explore this incredibly imaginative world, where men and women are able to fly, read minds, control time and magnetic fields, climb walls and manipulate magic. Everything is possible and the only limitation is the unbridled imagination of the artists – writers and designers – who in some eighty years of history have created an artform. What began as entertainment meant for the youngest, has gradually turned into a unique form of art and expression that has transcended the boundaries of the print media to arrive on television and in cinemas around the world. From the Amazons to Wonder Woman, from Frankenstein to the Hulk, from Robin Hood to the Green Arrow, legends change their appearance, but remain faithful to their original mission to guide new generations towards a better, brighter future, where action and battle are the flip side of a coin that calls for morality and responsibility. Around the world, many countries have made their contribution to the Superheroes, offering different and contrasting visions, adding pieces to a now planetary mosaic and evidence of a common response without borders.
Sculptures
Specimens
Languages
English
Italian
Additional Information
The exhibition deals with Modern Mythology in:
Egypt
Greece/Rome
North Europe
Russia
Middle Ages
Middle East
India
China
Japan
Africa
America
Highlights
Curatorial excellence
Star object
Treasure collection
Immersive experience
Interactivity
Highlights Details
Archaeological Artefacts:
- Greek-Roman Sculptures

All That Glitters: The Crown Jewels of the Walt Disney Archives