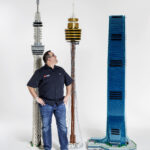 The world’s most iconic and eye-popping towers are featured, constructed exclusively of LEGO® bricks.
Message

Towers of Tomorrow with LEGO Bricks

Visitors will be inspired to create their own ‘towers of tomorrow’ with over 200,000 loose LEGO® bricks available in hands-on construction areas. Young and old will be limited only by their imaginations as they add their creations to a steadily rising futuristic LEGO® metropolis inside the exhibition. McNaught and his award-winning team of builders have used more than half a million LEGO® bricks and devoted over 2000 hours to build the structures featured in the exhibition.