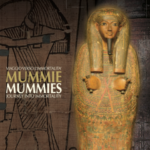 
This hiring fee is set for the following exhibition format:
See all available package options
Core Experience
Panels and graphics
Original collection
The Exhibition “Egyptian Mummies, Journey into Immortality” features some 100 exceptional original artifacts and exemplars, including mummies, painted sarcophagi, funeral trousseau and votive objects that together with suggestive exhibition design and background graphics evoke the mythical, mysterious landscape of the tombs and pyramids of Ancient Egypt. There, death was not considered the end of life. It was just the time of passing from one form of life to another that continued in the eternal afterlife, but the soul had to be prepared for this journey into immortality through various funerary customs necessary for survival in the afterlife. The soul had to be reincarnated in its own body, which had to be preserved forever. This necessity led to the search for sophisticated methods of embalmment which was practiced by the ancient Egyptians from the very first dynasties of their millenniums of history. It also led to the placement of rich and varied funeral trousseaus in tombs in the belief that the soul of the deceased must be supplied with everything it might need to continue living in the afterlife. The exhibition offers a particular focus on certain peculiarities of the funeral practices, particularly the process of mummification, a topic has long fascinated both experts and the common public ever since the Greek historian, Herodotus, who visited Egypt in the 5th century BCE, returned with incredulous reports about these procedures. Today’s public, perennially attracted to the theme as demonstrated by popular culture, has perhaps acquired distorted ideas about the search for immortality by the ancient Egyptians. The exhibition dispels certain misconceptions by offering a clear explanation that all the funeral rituals, even the most macabre, did not serve to simply preserve the body of the deceased, but rather to insure the continuation of life beyond the grave.
Specimens
Technical Requirements
High security
High conservation
Languages
English
Chinese
German
Italian
Past and Future Venues
National Archaeological Museum of Florence, Italy July 2019 - February 2020
Natural History Museum of Halifax, Nova Scotia, Canada, February - June 2020
History Museum of Mobile, Nobile, Alabama USA - February - June 2021
Highlights
Curatorial excellence
Star object
Treasure collection
Exhibition Add-Ons
Exhibition tour kit
Art
Civilisations
History
Ancient civilisations
Ancient worlds
Anthropology
Antiquity
Archeology
Go back to Exhibition Listings