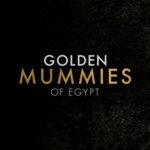 
This hiring fee is set for the following exhibition format:
See all available package options
Core Experience
Hands-on activities
Panels and graphics
Original collection
Exhibition Partners
Manchester Museum, University of Manchester, UK.
Glittering gold and mysterious mummies are among Ancient Egypt’s most iconic and popular attractions. Golden Mummies of Egypt presents eight extraordinary mummies and also explores beliefs about the afterlife when Egypt was part of the Greek and Roman worlds.Centred on eight mummies from the Manchester Museum’s world-class collection, this exhibition offers an insight into the hopes and fears of the wealthy in society. Those who could afford the expensive process of mummification hoped to cheat death. This ancient ritual harnessed the protective power of a range of Egypt’s many gods to immortalise the deceased. By being covered in gold, the Egyptians hoped to imitate the eternal radiance of the gods themselves.The University of Manchester has led research on Egyptian mummies for over a century, having acquired many of its objects from archaeological excavations. Innovative visualisation technology is used to bring cutting-edge CT-scans to life. Importantly, the exhibition also asks why we are fascinated by mummies and what they might tell us about ourselves.The exhibition includes 360 degree interactive CT-scans of three mummies on display, allowing the visitor to see beneath the wrappings. Audio-visual translations of texts bring the words of ancient people to life and iconographic visualisations animate the gods the Egyptians hoped to meet.
Sculptures
Decorative objects
Available Package Options
Turnkey
Technical Requirements
High security
High conservation
More Details About Technical Requirements
The exhibition is provided fully turnkey inclusive of all the museum grade display cases necessary to display the collections. All display cases feature fully integrated LED lighting.
Languages
English
Past and Future Venues
Buffalo Museum of Science, January to October 2020
North Carolina Museum of Art, October 2020 to April 2021
Highlights
Curatorial excellence
Star object
Treasure collection
Interactivity
Highlights Details
The collections featured in this major exhibition are drawn from the permanent displays of Manchester Museum which is undergoing a refurbishment. The collection items therefore represent the highest quality and are rarely seen internationally.
Exhibition Add-Ons
Exhibition tour kit
Easy translation
Catalogue / book
Speakers
Art
Civilisations
History
Ancient civilisations
Ancient worlds
Antiquity
Archeology
World culture
Go back to Exhibition Listings

Unofficial Galaxies: One of the largest Star Wars private collections in the world