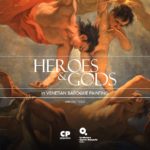 
This hiring fee is set for the following exhibition format:
See all available package options
Core Experience
Hands-on activities
Panels and graphics
Original collection
It can be said that beginning in the 17th century, the sun began to set on the ‘Serenissima.’ The mighty Republic of Venice that had once dominated the seas and trade routes of the Eastern Mediterranean and beyond, now faced decline. A new rich world to the west had been discovered. Yet the myths of Venice – complex, compelling and pervasive – continued to influence the artistic currents of Venice. This is the Venice of artists such as Padovanino, Federico Cervelli, Pietro Liberi, Giulio Carpioni, Luca Giordano and Sebastiano Ricci to name but a few. In this transitional period, through a repertoire of classical mythology, Venetian painting expresses ethical and philosophical messages that exalt Venice as the ideal republic. Through myth and allegory, Venice had always identified itself with high ideals, as a place where justice prevailed, and had elected to present itself as such to the wider world. It is an artistic season defined by a stylistic revival in Venetian painting which was stalled in a phase of creative fatigue. The artists of the first half of the 17th century rediscovered the traditions of color and atmosphere that so distinguished their predecessors of the 16th century. In this exhibition starring ca. 30 paintings, many of which are grand canvasses, belonging to the Fondazione Querini Stampalia of Venice, the reflection of Venice, as expressed in the masterful, mythological and allegorical Baroque language of these painters, is explored and beautifully illustrated. These interpretations of Venice are accompanied and enriched by an exquisite selection of objets d’arte, porcelain and precious works on paper from the extraordinary library of the Querini Stampalia.
Technical Requirements
High security
High conservation
Languages
English
Italian
Highlights
Curatorial excellence
Treasure collection
Interactivity
Exhibition Add-Ons
Media kit
Exhibition tour kit
Easy translation
Art
Fine art
Go back to Exhibition Listings